Until its recent downturn, the US stock market had been one of US President Donald Trump’s favourite topics.

He’s tweeted more than 60 times since his election about new highs and frequently touted the gains in public comments.

“The stock market is smashing one record after another, and has added more than US$7 trillion (NZ$9.6 trillion) in new wealth since my election,” he boasted last month to corporate and political leaders in Davos, Switzerland.

The fall came this month, with the first 1000-point drop ever for the Dow Jones industrial average. The Dow and broader Standard & Poor’s 500-stock index fell more than 10 per cent – what’s considered a market correction – before recovering much of those losses in recent days.

Some economists said Trump owns this drop – along with the unwelcome return of market volatility and a possible looming recession – not because of what he has said, but from what he has done. Until its recent downturn, the sharemarket was one of US President Donald Trump’s favourite topics.

The Republican tax cuts that Trump championed and took effect on January 1 injected a large fiscal stimulus into the US economy. And they appear to be having the intended effect. At their policymaking meeting in late January, Federal Reserve officials cited the tax cuts as one reason they were upgrading their growth expectations for 2018.

But critics say the cuts come at the worst possible time, when a near-record-long expansion has the nation at full employment.

Then this month Trump signed a two-year budget bill that adds even more stimulus by boosting spending roughly US$400 billion more than had been planned.

The moves could get the economy revving too fast while swelling the already large federal budget deficit. That would lead to rising interest rates and higher inflation that would slow economic growth by making it more difficult for consumers and businesses to borrow money while at the same time reducing that money’s buying power.

It’s all a recipe for recession and the reason investors have gotten anxious, said Mark Zandi, chief economist at research and analysis firm Moody’s Analytics.

“It’s as if someone picked up a macroeconomic textbook and decided to do just the opposite of what it told you to do,” Zandi said. “The economy is at full employment, and if you juice things up by cutting taxes and increasing government spending – all deficit-financed – the economy will get away from you. It’s going to overheat.” 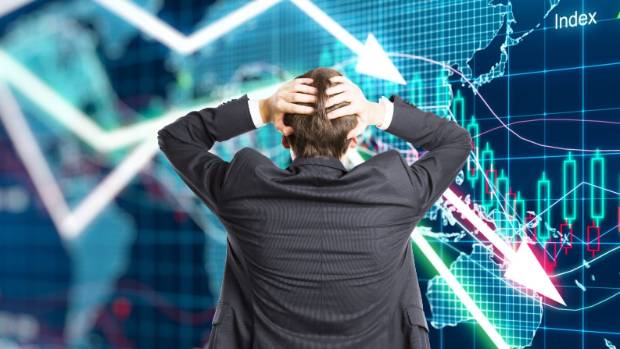 Some economists said Trump owns this drop – along with the unwelcome return of market volatility and a possible looming recession.

Billionaire hedge fund manager Ray Dalio estimated during an appearance at Harvard University last week that the odds were “about 70 per cent” that the US would fall into a recession before the 2020 presidential election.

A downturn already is overdue. Since World War II, the US has averaged a recession roughly every five years. The current nine-year economic expansion is the second-longest in the nation’s history and by midsummer would be the longest.

The tax cuts, focused on corporations and the wealthy, will raise the already large federal budget deficit by nearly US$1.5 trillion over the next decade, according to Congress’ nonpartisan Joint Committee on Taxation. Even taking into account additional economic growth spurred by the tax cuts – a development that some experts doubt – the deficit still will increase by about US$1 trillion during that period, the committee estimated.

Trump administration officials acknowledge that the deficit will jump in the short term. But they said that’s worth it to boost economic growth from the sluggish 2 per cent level that has marked the recovery from the 2007-09 recession and to further strengthen the US military, where much of the additional funding will go.

“We inherited an economy that really had some serious problems … and we fixed that. And there was near-term cost to the deficit,” Kevin Hassett, chairman of the White House Council of Economic Advisers, said last week.

“But I think, in the long run, we’re going to be glad that we did fix those things. And we’ll also be better able to address deficit problems because of all the extra resources we have because of a healthy economy.”

Hassett released a report on Wednesday that estimated total economic output, also known as gross domestic product, would grow 3.1 per cent this year and be at or above 3 per cent through 2024. That is higher than estimates from the Fed and some private forecasters.

Administration officials have downplayed the market gyrations, saying the economy’s fundamentals remain strong. And Trump’s supporters note that the major US stock indexes still are up significantly since his election – the Dow about 38 per cent and the S&P 500 about 28 per cent.

Trump hasn’t had much to say about the stock market since the turmoil began this month.

On February 7, he tweeted his lament that when good economic news comes out, “the Stock Market goes down”.

And Friday, in a speech to the Conservative Political Action Conference, Trump acknowledged the markets “did a little bit of a correction”.

There is no doubt that the federal budget deficit is going up, and the increased borrowing by the US Treasury is a key reason interest rates are rising as well.

The Treasury Department said this month that it expected to borrow US$955b in the 2018 fiscal year, which began on October 1. The figure is a sharp increase from US$519b last year and would be the most federal borrowing since 2012, when the economy was still struggling to recover from the recession.

The borrowing increases to US$1.08 trillion in fiscal 2019 and to US$1.13 trillion the following year, the Treasury Department predicted. Those estimates came before the two-year budget deal, which will add to the federal government’s need to borrow money.

After keeping the federal funds rate near zero from late 2008 until late 2015 to try to stimulate growth, Fed officials have been gradually moving the rate up to keep the economy from overheating and prices from rising too quickly.

The rate now is between 1.25 per cent and 1.5 per cent, and Fed policymakers have indicated it will top 2 per cent by the end of the year. The federal funds rate is the interest rate at which banks loan reserves to each other overnight to meet Fed requirements. Banks use the rate to determine interest rates for credit cards, car loans, small business loans and home equity lines of credit.

Fears of higher inflation, which in turn could lead the Fed to accelerate its rate increases, caused the recent stock market volatility. The big trigger was a Labor Department report on February 2 that said average hourly earnings in January rose 2.9 per cent over the previous 12 months, the largest year-over-year gain since 2009.

Those higher rates are not welcome on Wall Street.

They make stocks a less attractive option because it’s more expensive for companies to take out loans to expand and it costs more for customers to borrow to buy the products. Rising interest rates also generally signal an economic expansion is nearing its end, which can cause investors to flee stocks for relatively safer bonds whose yields are rising.

That, combined with the additional fiscal stimulus coming from tax cuts and federal spending, led him to lament at a forum this month that “for the sake of one miserable percentage point of GDP we’re prepared to risk the whole economy”.