WASHINGTON (AP) — Republicans have sped legislation through the House to expand their massive new tax law, capping their session for the year as they rush out of town to face voters in the November elections. The new bill would make permanent the individual and small-business tax cuts in the law. 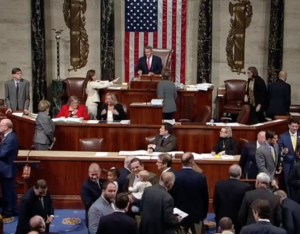 Friday’s vote was 220-191 in the Republican-led House to approve the legislation. It’s the second tax-cut proposal that Republican leaders have pushed in less than a year. The vote was mostly along party lines. Democrats continued their solid opposition to tax-cut legislation, asserting it favors corporations and wealthy individuals over middle-income Americans.

The GOP lawmakers are pushing to hold onto their seats in relatively affluent suburban districts where President Donald Trump is unpopular. Residents in those states could see substantial increases in their federal tax bills next spring because of the $10,000 cap on state and local deductions in the tax law. The new legislation would make the cap permanent.

Prospects for the legislation in the Senate are weak, given the slim Republican majority and concern over the potential for further blowing up the deficit with new tax cuts — without corresponding new revenue sources. The sweeping rewrite of the tax code that Republicans hustled through Congress late last year, signed into law by Trump as his signature legislative achievement, is expected to add about $1.5 trillion to the deficit over 10 years.

The bill approved Friday would add another $545 billion through 2028, according to an estimate by Congress’ bipartisan Joint Committee on Taxation.

With the midterm elections looming, polls have shown only lukewarm support among voters for the package of individual and corporate tax cuts that took effect Jan. 1. The new law provides steep tax cuts for corporations and the wealthiest Americans, and more modest reductions for middle- and low-income individuals and families.

Early this year, millions of working Americans got a boost from the tax law as they saw increases in their paychecks with less tax withheld by employers. But as Trump has undertaken trade wars with China and U.S. allies, trade tensions have overshadowed the tax cuts in economically vulnerable areas of the country that depend on exports.

In House debate on the bill, Democrats continued to denounce the existing tax law and new proposal, and repeatedly pounded on their impact on the mounting $21 trillion deficit. The Republicans will seek to fill the hole by cutting deeply into Medicare and Social Security, Democratic lawmakers warned.

“This is all borrowed money that will go to corporations and high-income earners,” said Rep. Richard Neal of Massachusetts, the senior Democrat on the Ways and Means Committee. The new legislation “is another reckless tax cut for the wealthy that leaves behind average, hardworking families.”

While the new law slashed the corporate tax rate permanently from 35 percent to 21 percent, its tax cuts for individuals and the millions of U.S. “pass-through” businesses expire in eight years. The “pass-through” businesses funnel their income to owners and other individuals, who then pay personal income tax on those earnings, not the corporate rate. They are allowed under the new law to deduct 20 percent of the first $315,000 of their earnings.

The legislation clearing the House on Friday would make the cuts for individuals and pass-through businesses permanent.

On Thursday, the House passed a pair of Republican-written companion bills that would add incentives for savings and startup businesses to the new tax law. The votes were 240-177 and 260-156, also mostly along party lines.

One of the measures would create a “universal savings account” for families that could be used for a range of purposes and would allow the tax-free earnings to be more easily withdrawn than is the case with existing retirement accounts. In addition, it would allow the popular, tax-free 529 college savings accounts to also be used to pay for apprenticeship fees and home schooling expenses, as well as to pay off student debt. Workers would be able to tap their retirement savings accounts without tax penalty to cover expenses from the birth of a child or an adoption.

The second measure would allow startup businesses to write off more of their initial costs against their federal taxes. New businesses would be permitted to deduct more of their expenses for setting up in the first year — up to $20,000, double the current maximum level.

Democrats said there were some positive elements in the legislation, but that overall it would not help average Americans. The new savings accounts would mainly benefit wealthy taxpayers, with about $100,000 in annual income needed to take full advantage of them, said Rep. Lloyd Doggett, D-Texas.