A lawyer for President Donald Trump has written the Treasury arguing Congress has ‘no legitimate purpose’ in obtaining the president’s tax returns.

The letter, from Trump lawyer, William Consovoy, argues that the request, put forward by a Democratic committee chair this week, constitutes ‘harassment’ and violates the First Amendment.

The legal pushback came as Trump said the law is on his side ‘100 per cent’ – setting up a confrontation that could end up in the Supreme Court.

‘Even when Ways and Means can identify some legitimate committee purpose, it cannot request tax returns and return information to punish taxpayers for their speech or politics,’ wrote Consovoy in a letter to the chief counsel of the Treasury Department. 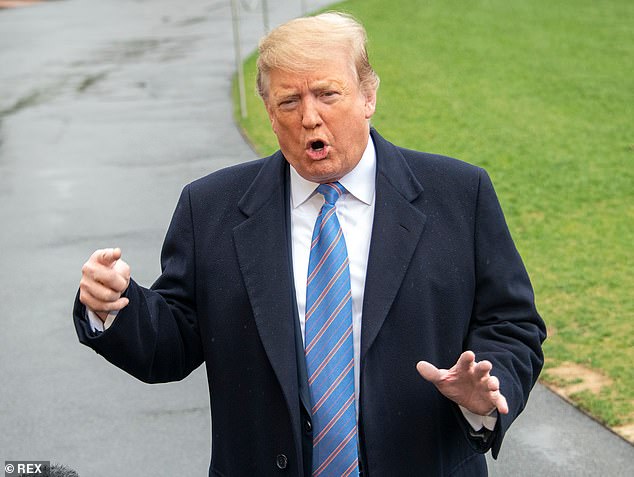 He said the request for the returns ‘is about scoring political points against President Trump.’

‘The ‘First Amendment freedoms’ of ‘speech,’ ‘Political belief,’ and ‘association’ apply to congressional investigations,’ he wrote.

‘And the First Amendment prohibits the government – including Congress – from harassing political opponents and retaliating against disfavored speech.’

He wrote that handing over the returns would serve ‘no legitimate committee purpose’ and claimed the request ‘flouts these fundamental constitutional constraints.’

‘It would be a gross abuse of power for the majority party to use tax returns as a weapon to attack, harass, and intimidate their political opponents. Once this Pandora’s box is opened, the ensuing tit-for-tat will do lasting damage to our nation,’ he wrote.

‘Chairman Neal’s request flouts these fundamental constitutional constraints. Ways and Means has no legitimate committee purpose for requesting the President’s tax returns or return information. While the committee has jurisdiction over taxes, it has no power to conduct its own examination of individual taxpayers,’ according to the letter.

Earlier Friday, Trump signaled he is preparing for a legal battle in order to keep his tax returns out of the hands of Congress – saying the law is on his side ‘100 per cent.’

And Trump said the decision was up to ‘whoever handles it.’

Trump made the comment Friday, a day after invoking his lawyers when asked about House Ways and Means Committee chairman Rep. Richard Neal’s letter asking the head of the IRS to hand over six years of the president’s returns.

WHO WILL DECIDE THE FATE OF TRUMP’S TAX RETURNS?

House Ways and Means Chairman Rep. Richard Neal of Massachusetts has written the IRS seeking six years of President Trump’s tax returns. He addressed his letter to IRS commissioner Charles Rettig, who in theory could hand over the returns immediately.

However, Trump’s personal lawyer, William Consovoy has written Brent McIntosh, the general counsel of the Treasury Department, arguing against their release. He urges the IRS not to ‘acquiesce’ to Neal’s request, acknowledging that the decision is in the agency’s purview.

The IRS commissioner reports to the Treasury Secretary, Consovoy’s letter quotes Mnuchin. Both Mnuchin and Rettig received carbon copies on the letter, as did William F. Nelson, a tax lawyer in Washington. The letter also seeks an opinion from the Justice Department’s Office of Legal Counsel, which brings yet another agency into the mix.

Neal’s letter references provision 6103 of the Internal Revenue Code. The provision of the law states that the Treasury secretary ‘shall furnish’ any tax return or related materials, which are to be viewed only in closed session. Neal set a deadline of next Wednesday, but federal agencies routinely ignore such deadlines. Should the IRS fail to turn over the returns, it could provoke a court fight that could take many months to resolve.

If Rettig or Mnuchin were to refuse the request, Congress could seek to hold them in contempt. Or, Democrats could issue a subpoena, according to Politifact. Either scenario could trigger court action.

‘I think the law is pretty clear,’ Rep. Hakeem Jeffries of New York told CNN Friday. Referencing the Internal Revenue Code provision, he said: ‘That’s not discretionary language. That is mandatory language. No singular individual in this country is above the law.’ He added: ‘We’re hopeful that the Article III federal courts will see it our way as well.’

Congressional Democrats, including Neal, have already anticipated such a case. Neal may even have scaled back his document requests in order to position himself better for court. If the IRS fails to act, the burden would be on House Democrats to sue in federal court to try to force IRS compliance. Given the high stakes and unprecedented push for a president’s returns, the matter could end up in the Supreme Court. It remains to be seen whether this would all play itself out before the 2020 elections.

His lawyer’s letter casts the request for the returns as beyond the power of Congress to investigate.

The law states that the Treasury secretary ‘shall furnish’ the documents, which are to be viewed in closed session – providing hope to Democrats that they will ultimately prevail, even if Trump’s lawyers mount a defense.

But Consovoy’s letter takes up an argument Trump has made against the Mueller probe – that the inquiry is meant to harass him personally.

‘His request is a transparent effort by one political party to harass an official from the other party because they dislike his politics and speech, Consovoy writes.

‘Chairman Neal wants the President’s tax returns and return information because his party recently gained control of the House, the President is their political opponent, and they want to use the information to damage him politically,’ the letter stipulates.

Internal Revenue Code on disclosure to committees of Congress

‘It is no secret that a vocal wing of the Chairman’s party has been clamoring for the President’s tax returns since before the 2016 election. And it is no coincidence that Chairman Neal made his request just days after prominent Democratic constituencies began publicly criticizing the House for its failure to go after the President,’ he wrote.

Trump at first sounded detached when asked if he would relinquish his returns – which he never released during the 2016 campaign despite saying he would do so.

‘That’s up to whoever handles it,’ Trump told reporters as he left the White House for California.

‘I’m under audit. But that’s up to whoever it is,’ Trump said. ‘From what I understand the law is 100 percent on my side.’

Later Friday, CNN quoted an administration saying Trump and his advisors were willing to dig in on the issue of non-disclosure.

‘This is a hill and people would be willing to die on it,’ the official said.

On Thursday, Trump dismissed the demand for his returns which he refused to relinquish despite decades worth of precedent.

Trump ‘doesn’t have any intention to release those returns,’ Press Secretary Sarah Sanders said Thursday. She insisted, as the president has, that his returns are ‘under audit,’ and ‘he doesn’t anticipate that changing at any point anytime soon.’

U.S. presidents going back to Richard Nixon have released their returns, including when under audit. Trump said at one point during the campaign he had been audited 12 years in a row – though being under audit would not prohibit him from making returns public if he so chose.

Neal is seeking six years of Trump’s personal tax returns, from 2013 to 2018, as well as returns for eight Trump business entities.

‘Under the Internal Revenue Manual, individual income tax returns of a President are subject to mandatory examination, but this practice is IRS policy and not codified in the Federal tax laws,’ Neal wrote in a letter to the IRS.

‘It is necessary for the committee to determine the scope of any such examination and whether it includes a review of underlying business activities required to be reported on the individual income tax return.’

Democrats are seeking information on a web of Trump financial entities.

Their list refers to returns from LFB Acquisition LLC, the firm that took up formal ownership of the Bedminster Golf Club in New Jersey the day before Trump was inaugurated. Also included is DTTM Operations LLC, which includes Trump trademarks on a range of products, from Trump Vodka to bottled water and fragrances as well as Trump hotel operations.

Neal is also seeking information on DJT Holdings, the company set up for Trump Organization ownership after Trump won the White House. It is among eight Trump entities where the chairman, who has the right to view any American’s return under current law, is seeking information.